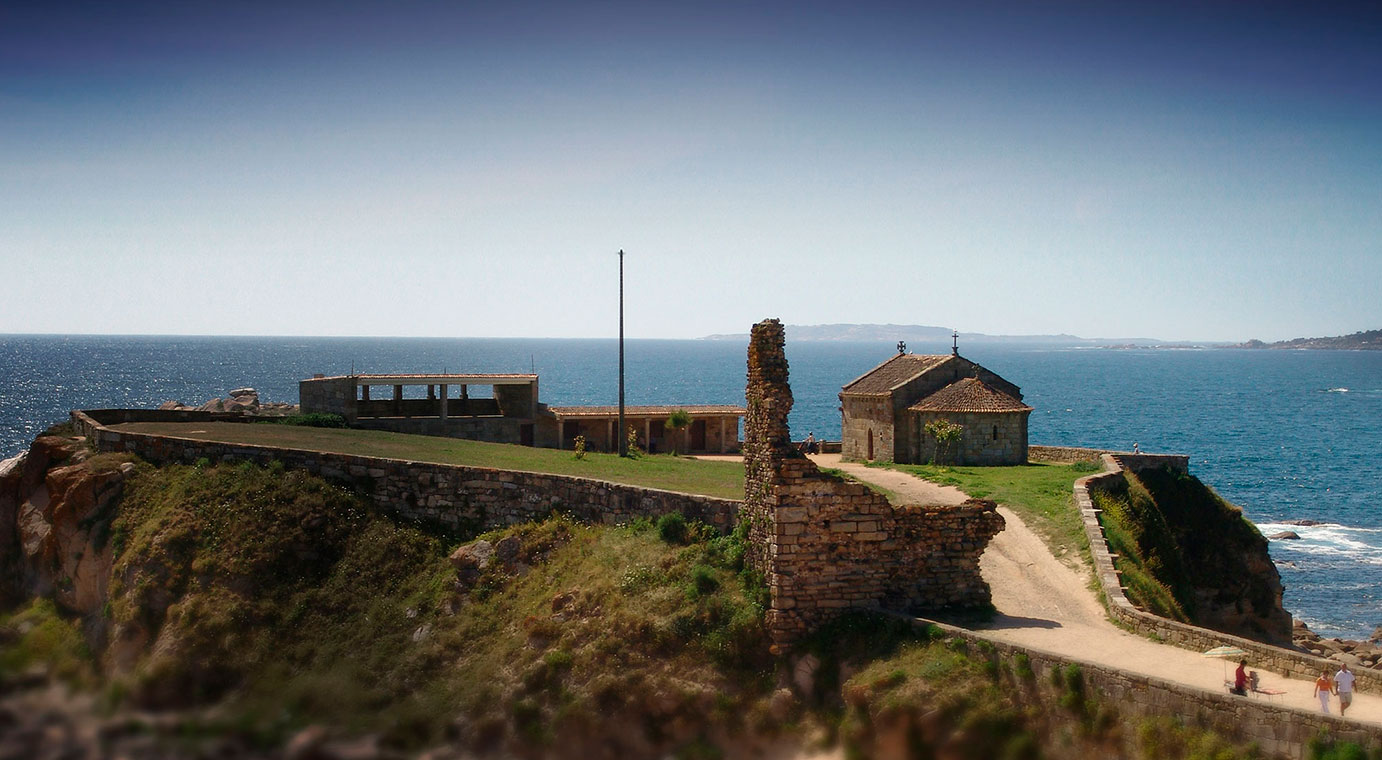 The Route of Father Sarmiento

Among vineyards, valleys and rivers, the Route of Father Sarmiento leads us through “the most picturesque region that you could ever dream of”, as affirmed by the writer Emilia Pardo Bazán.

With views over the Pontevedra and Arousa Rivers, we will discover the path that Fray Martín Sarmiento took in 1745 in order to earn the plenary jubilee year indulgence. A 190-kilometer path that runs along Spain’s beautiful coast toward Santiago de Compostela.

A route which is full of history, nature and landscapes that would inspire the best photographs and the most beautiful memories.

O Salnés is a path over the sea. A world of contrasts between valleys and seaside villages. 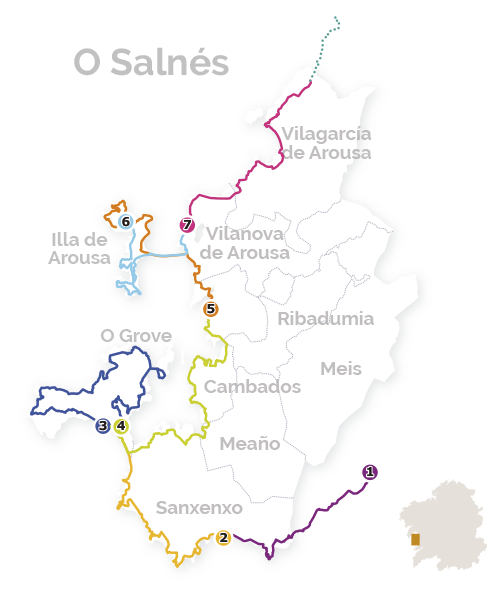 Download
Experience it, feel it! Discover its secrets, because all routes end when you stop!

Pedro Xosé Balboa, known as Friar Martín Sarmiento, was born in Villafranca del Bierzo. His family, of noble origin, moved to Pontevedra just a few months after his birth, and he spent his childhood there. In 1710, he moved into the Convent of San Martín in Madrid, to become a Benedictine monk.

He developed an intellectual relationship with Father Feijoo, becoming his disciple and collaborator. Together with him, he fought superstition and ignorance, promoting the establishment of libraries in the towns. Sarmiento understood that it was necessary to understand, restore and preserve traditions and popular culture. He was a great precursor of this and strongly contributed to the research and recovery of Galician culture.

Sarmiento was not only interested in linguistics but also other disciplines such as botany and medicine. He was a man very much concerned about improving his country’s technical and economic status, very much in line with the thinking of the Enlightenment. 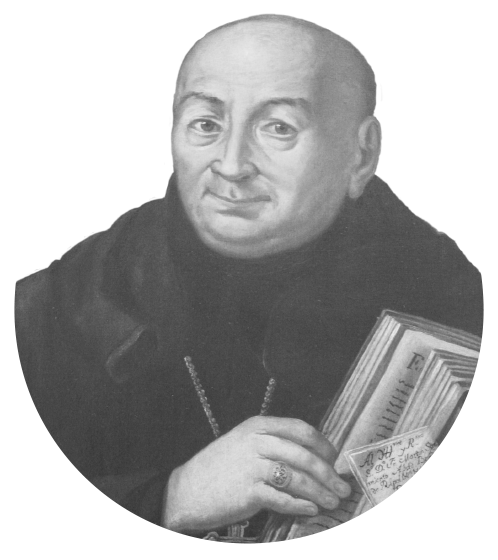 When departing from Pontevedra, by crossing the “O Burgo” bridge, the shoreline of the River leads us toward the Local Council buildings of Poio. Its majestic monastery is considered to be the antechamber of the route that will take us to the region of O Salnés.

Our route takes us to Combarro, a symbol of the perfect union between the blue of the sea and the land carved from granite. While walking among its fisherman’s houses, granaries and cross symbols, the route invites us to imagine the history of the mysterious Tambo Island.

The path submerges us in a coastline that is characterised by secluded coves, inlets and majestic corners that open to the world from the lookout point of “A Granxa”. From there, we are able to enjoy marvellous views of the Pontevedra River while we walk toward Sanxenxo, by far the most prominent landmark of Galician tourism.

While taking a rest above the sea, the essence of “la Madama” covers with mythology and charm the township where time never sleeps. In all of its streets we can find an option to conclude this first stage.

Sanxenxo is a definitively walk along the seashore which provides us with a green zone for our recreation at the lookout point of Punta Vicaño. While walking toward Portonovo, we shall leave behind us a landscape of urban beaches and we shall enter a more natural environment.

From Punta Faxilda, the impressive views of the Ons Island reveal the reason why the sunsets at O Salnés are so unique. At the hermitage of A Lanzada, the legends and rituals that shroud the historic fortress enhances the spectacular presence of the sea. The waves of the Atlantic Ocean batter the remains of the tower that the Meiriños constructed for the defence of Compostela. And it is here, between Sanxenxo and O Grove, where we can find one of the most beautiful beaches of Galicia, the Lanzada beach. A magical place, surrounded by a dune ecosystem.

O Grove invites you to enjoy sites where nature, history and gastronomy enable us to discover the astounding aspects of this peninsula. A 29-kilometer circular stage leads us through this town, which is considered to be a “seafood paradise”.

The route to the centre of the town shall provide us with some of its best kept secrets. Beautiful views of the Sálvora Island, archaeological sites, lagoons and an outdoor museum, are just some of its treasures.

After the port of O Grove, we then continue on toward the La Toja Island, famous for its thermal waters. There, we shall be able to visit its peculiar hermitage, characterised by the fact that it is completely covered with scallop shells.

Three kilometres before the end of this stage, at the lookout point of the Siradella Mountain, we shall be able to enjoy the most privileged views of the Arousa River.

In this stage we advance towards the heart of O Salnés, the Meaño lands.

Old tile factories (As Telleiras) add to the landscape the historical aspects of the day to day activities of the zone. A marshland and vineyard landscape indicates that we are arriving at Cambados, the capital of the Albariño wine.

The seaside town of “Santo Tomé” retains its old charm. Houses covered with shells and monuments such as the Pazo de Montesacro or the Torre de San Sadurniño, conserves the grandeur of a town that fought against Normans and Vikings. The capital of Albariño invites us to take a casual walk through its stone streets, manor houses and squares. This royal town is in itself one of the most admired historical artistic sites.

In “Fefiñáns”, one of the most beautiful squares of Galicia, we shall conclude this stage.

In the first section of this stage, we shall come across the Molino de Mareas of “A Seca”, one of the few seawater mills that exist in Galicia and that will surprise you by reason of its peculiar engineering. It is currently fully restored, and operates as a museum. We shall continue our route bordering the coast until we come to a two-kilometre bridge that shall lead us to the town of “A Illa de Arousa”.

This town is an idyllic place, which is characterised by the fishing tradition and is surrounded by the most beautiful beaches. The fishing port of “O Xufre”, the lighthouse of “Punta Cabalo”, the route of “Os Cons” (large granite rocks sculpted by wind and waves) and the lookout point of “Con do Forno” are some of the impressive aspects of this route.

The “Muelle de Pau” and the Conserva museum shall conclude this 21-kilometer stage.

We shall commence this stage by walking toward the Carreirón Natural Park. A site characterised by its crystal clear water and white sandbanks. We should also remember that we find ourselves in a special zone for bird watching.

After crossing the bridge again, we shall continue our walk toward the beaches of “O Terrón”, a coastal walk that shall lead us to the centre of Vilanova de Arousa. This town, that was the home town of the writer Ramón del Valle-Inclán, provides us with the opportunity of reliving history by visiting its house museum.

In Vilanova de Arousa, the “Route of Father Sarmiento” joins up with the “Variante espiritual” (or “Spiritual variant”), which, through the Translatio, enables us to discover “the origin of all routes”.

This stage enables us to continue discovering the marvellous landscape of our River. From the sandbanks of “as Sinas” we continue toward the seashore town of Vilaxoán.

The botanic park of Enrique Valdés Bermejo welcomes us to Vilagacía de Arousa. The city known as the “Port of Compostela” and that shall enable us to discover the Pazo de Vista Alegre, that, together with its convent, form an impressive architectural complex declared to be a National Historical and Artistic Monument.

The most urban and commercial section of our route shall lead us to the marina. The Compostela beach shall lead us to the seashore town of Carril, from where we shall be able to contemplate “Cortegada”, a green island on which the largest laurel forest exists throughout all of Europe, with trees of up to 13 meters tall.

The walk toward Catoira is characterised by a landscape of forests and marshlands. The Arousa River joints the Ulla River, creating a natural boundary that separates the provinces of Pontevedra and A Coruña.

The Torres del Oeste remind us of its glorious past in defence of the town of Compostela and help us to imagine the final voyage of the remains of the Apostle along the Ulla River to Pontecesures, toward Santiago de Compostela.

After Padrón, our route continues the path of the Portuguese Way through Iria Flavia, Esclavitud and small rural towns within the municipality of Teo. We are now close to the Santiago de Compostela Cathedral where, like we have, Fray Sarmiento completed his journey in 1745 to earn the plenary jubilee year indulgence. 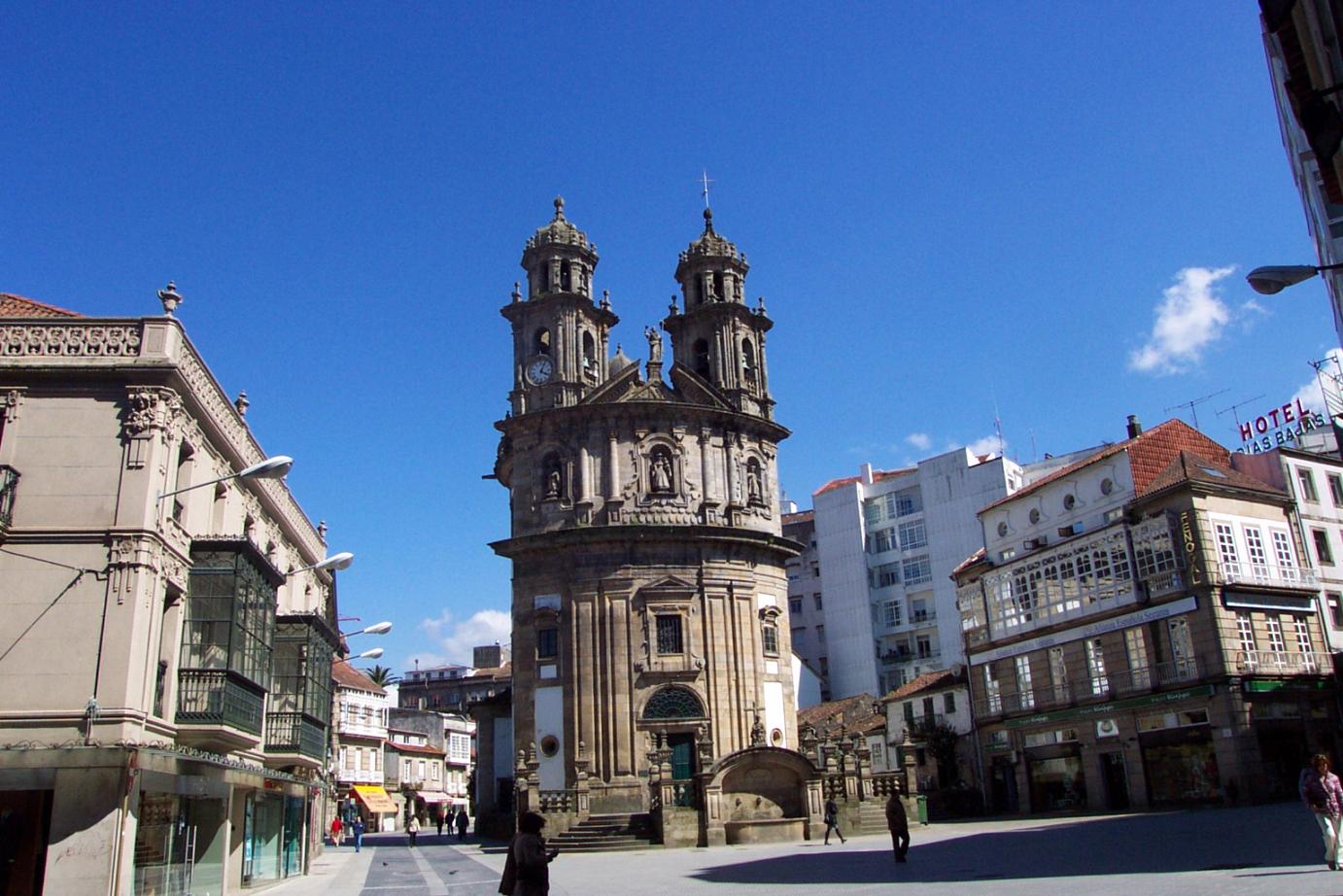 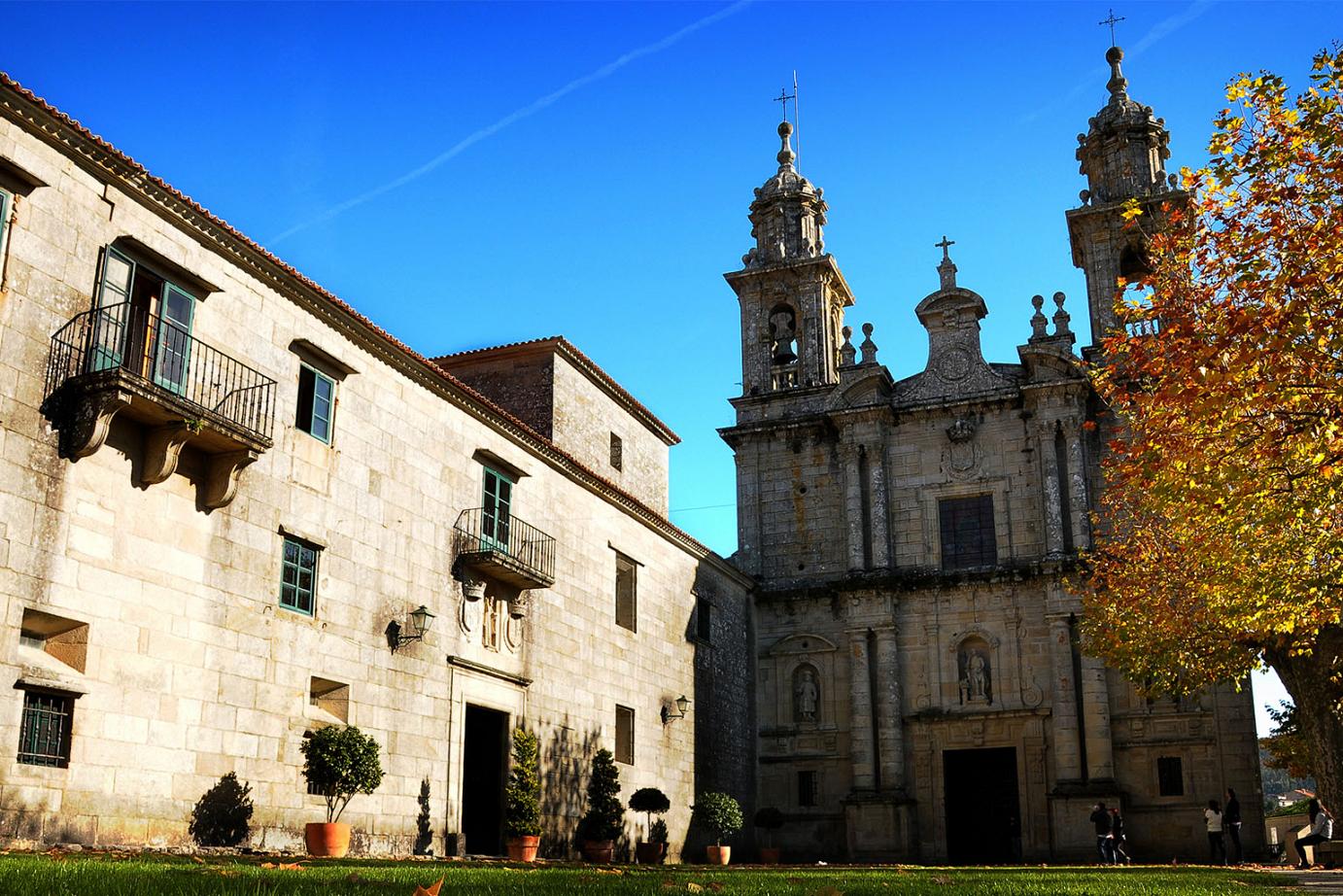 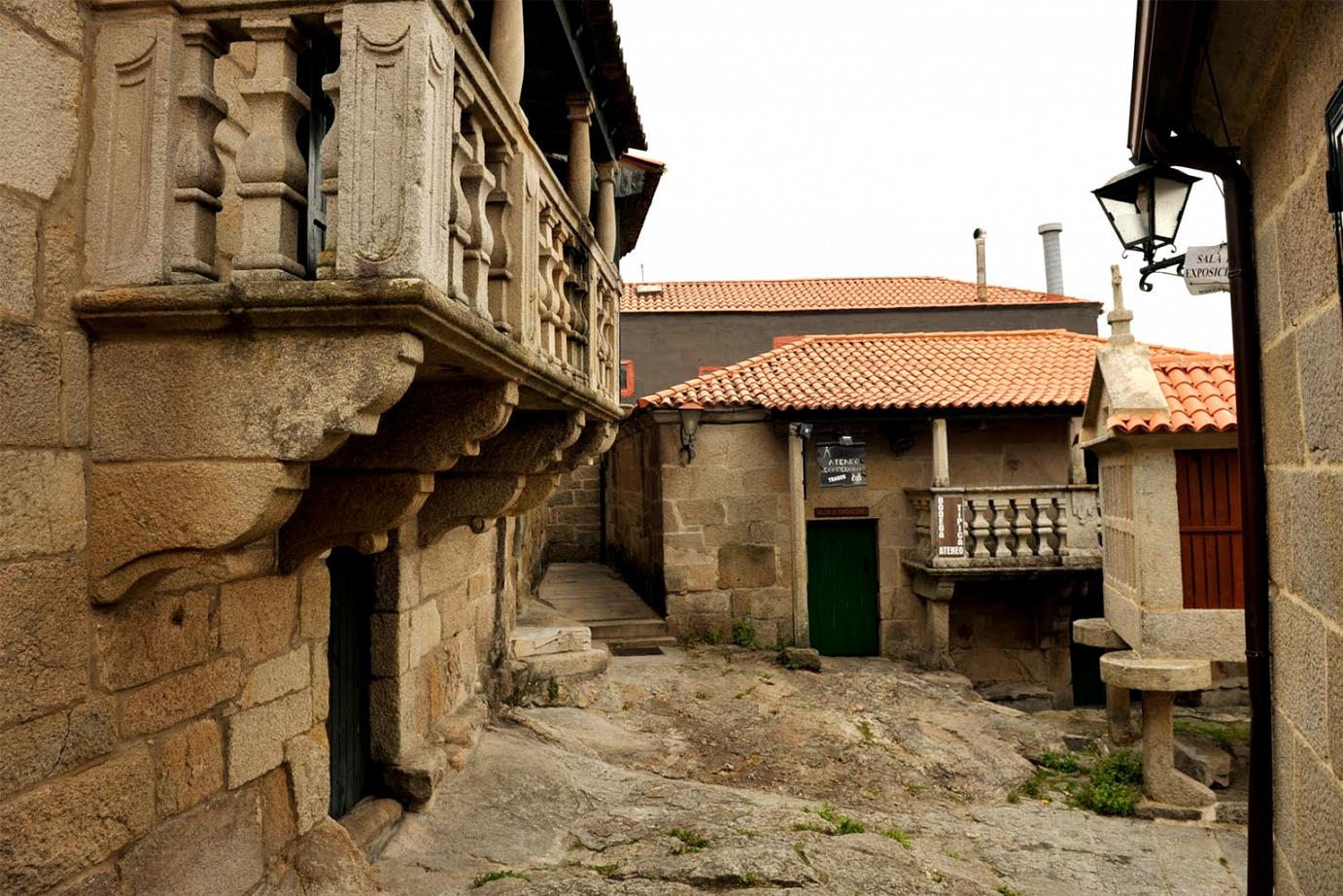 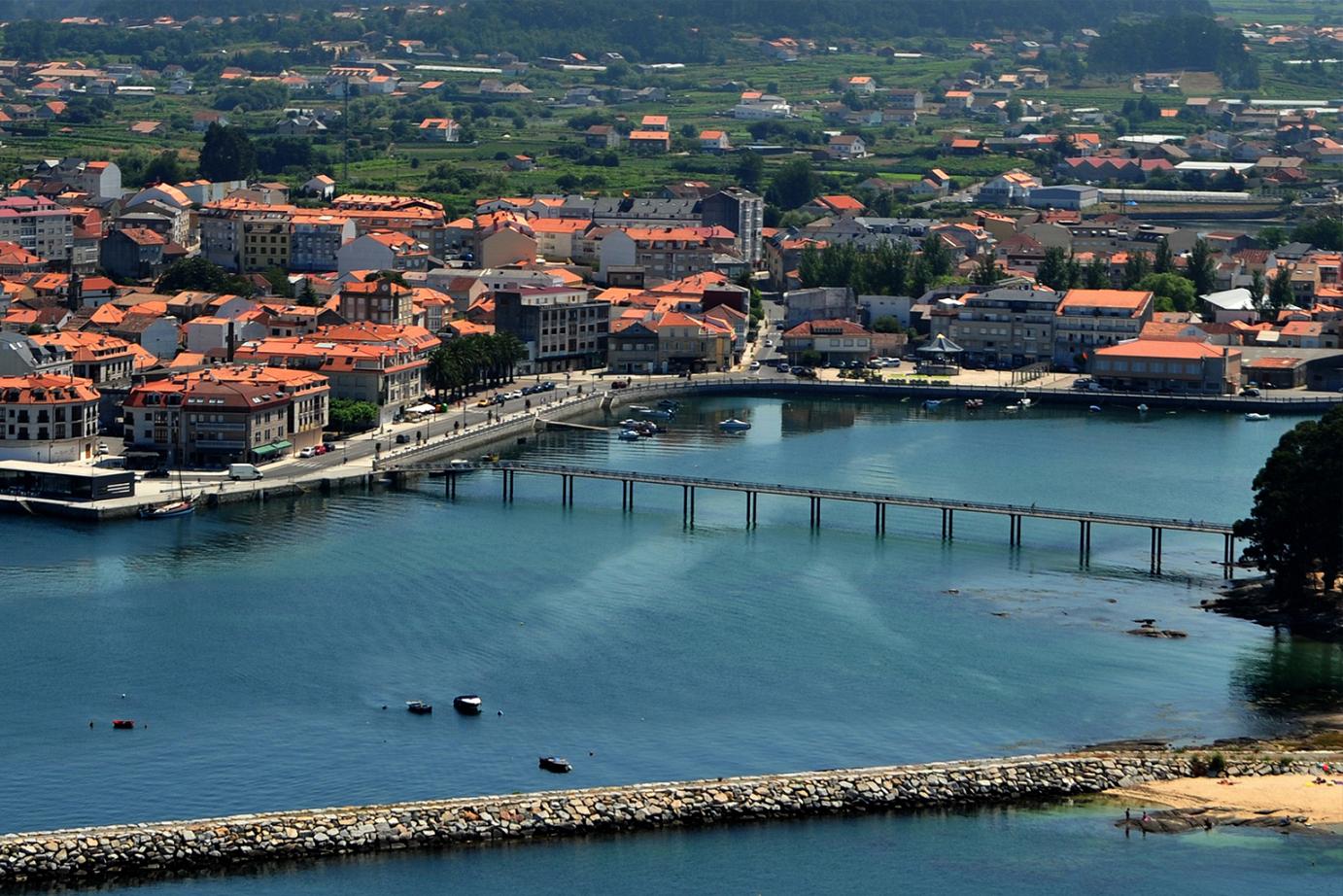 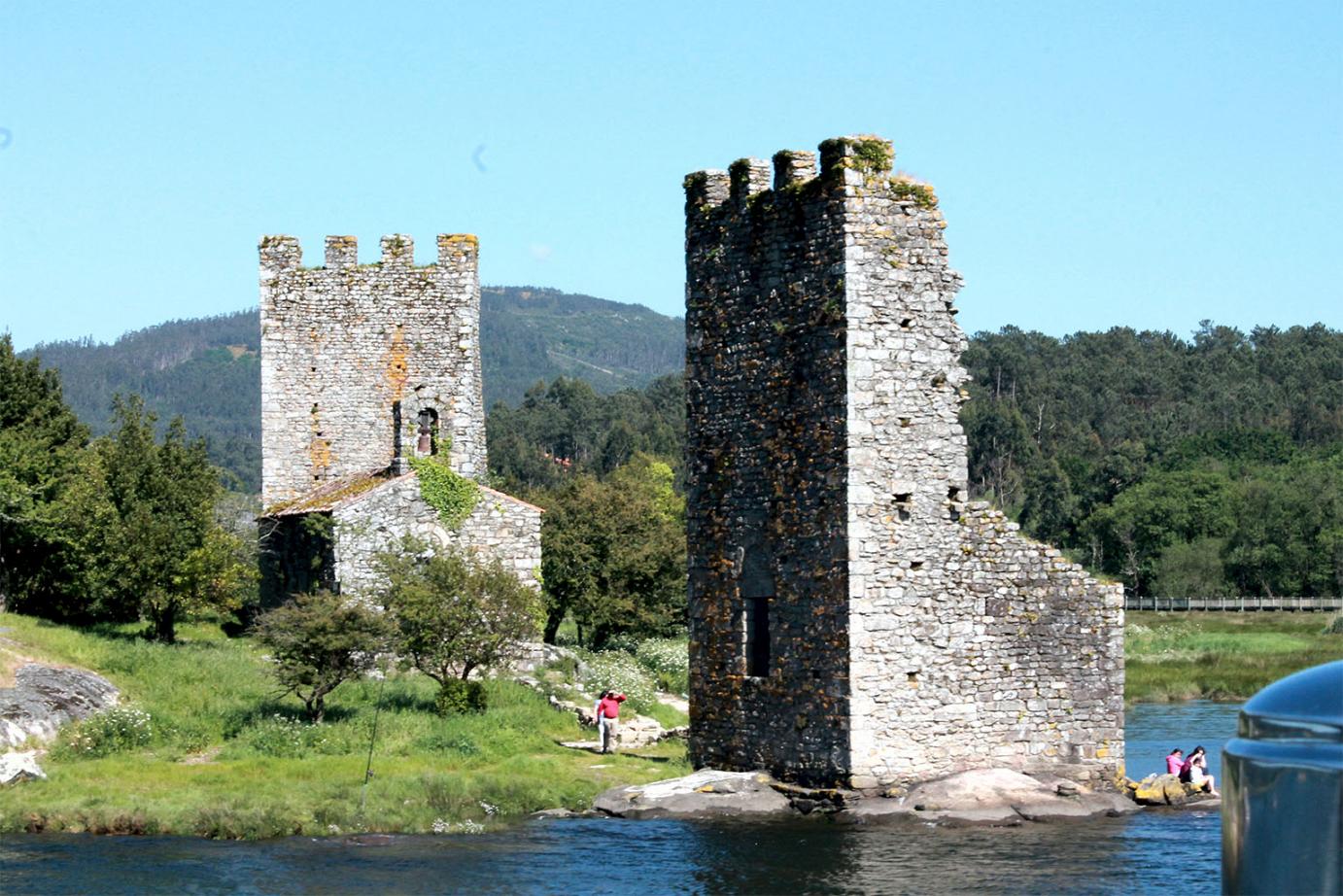 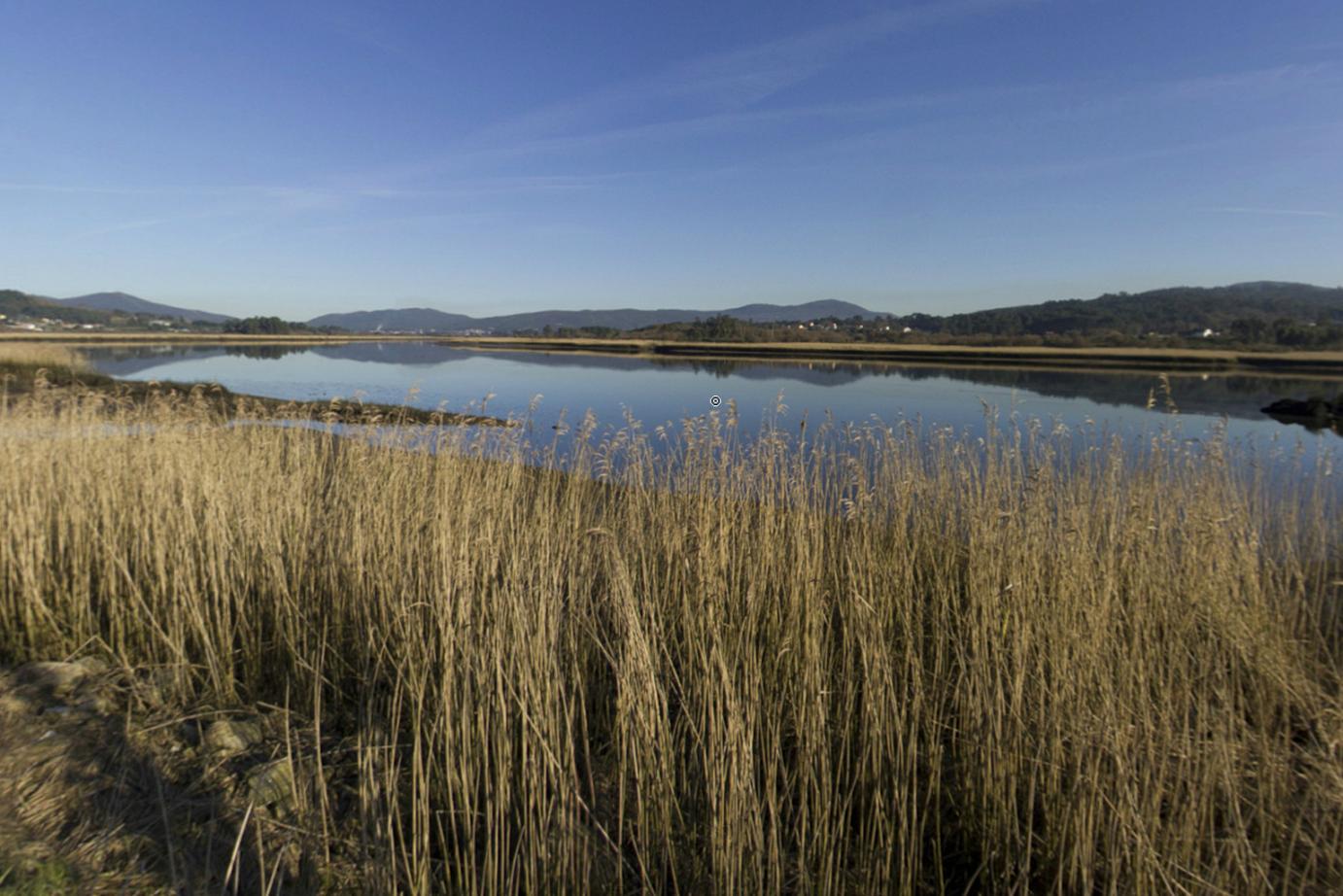